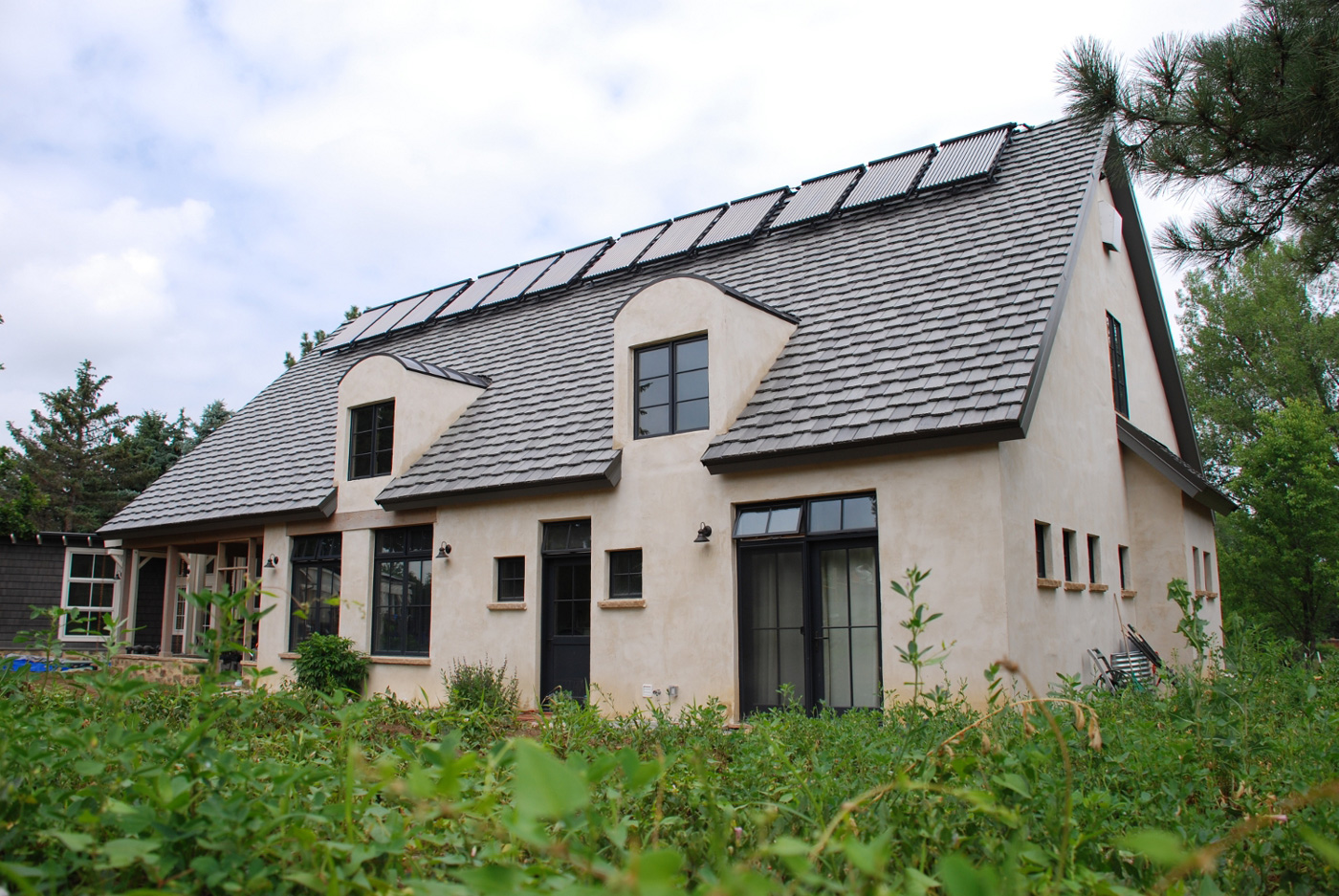 We loved working with these clients! They were clear on their priorities and willing to explore fun ideas for incorporating these priorities into their house design. It meant a lot to me as the architect that they wanted to hold true to the original owners vision even thought they were looking at a significant change to the home and property:

By Mark Collins For the DailyCamera

Scott Porter points out the solar energy systems he has at their home. The remodeled home of Margaret Rogers and Scott Porter has several renewable energy systems. It follows the intent of the original owners, who installed several eco-friendly features in the 1970s.

Marge McLellan and her late husband, Russell, were concerned about renewable-energy sources long before the term “carbon footprint” made its way into the popular lexicon.

“I was a science teacher in the Boulder Valley Schools and we started hearing about this (in the 1970s),” McLellan said. “We went to workshops and they started talking about solar collectors. My husband was very much interested, too.”

During a field trip to a Catholic church in Boulder, McLellan encountered a Trombe wall — a passive-solar system designed to take advantage of the sun’s energy on the south side of a structure.

The McLellans soon made plans to have a Trombe wall built at their 1,400-square-foot home in Fairview Estates. They also added extra insulation to their attic, and installed eco-friendly cork flooring in the kitchen. Marge McLellan kept bees and raised a large garden, which furnished her table with food.

More than 30 years later, those environmentally conscious elements, in addition to the several trees the McLellans planted, remain. That’s because the home’s new owners, Scott Porter and Margaret Rogers, wanted to honor the McLellans’ legacy of environmental concern after they bought the property in 2006.

The couple, who moved to Boulder from Cherry Creek, lived in the home for a year and a half, carefully planning a remodel of the structure first built in 1959. They found architects, Dale and Elizabeth Smith of Fänas Architecture, who shared their vision of keeping the existing structure, and creating a new part alongside it that employed extensive green-building materials and systems. They embarked on the project in spring 2008.

“Sustainability is something we feel pretty strongly about,” said Porter, who works as a software consultant.

So strongly did the couple feel about sustainable design, Rogers used the project as the opportunity to make a career change. After working for years in telecommunications, Rogers is now a LEED-certified professional. She plans a business as a sustainability coordinator for homeowners and contractors moving forward.

The Porter-Rogers home is powered mostly by a photovoltaic solar array that sits atop the older structure. It’s designed to produce from 90 to 110 percent of their electrical needs, Porter said.

A meter installed at the solar inverter indicates the solar array has saved more than 129,000 pounds of carbon since it was installed 11 months ago.

In addition, the couple took out the former forced-air heating and cooling system, and had a hydrant thermal-solar system installed on a portion of the roof. An array of solar evacuation tubes sends warmed water into holding tanks in a small basement area. The holding tanks then send the warmed fluid to a radiant-flooring system, and wall radiators in the home.

“The other thing about the radiant floor is that it’s embedded in concrete, and that adds thermal mass,” said Smith of Fänas Architecture.

The new structure features insulated concrete-form walls, which create substantial thermal mass, too. That helps the home maintain a steady indoor climate once it’s heated or cooled to a desired temperature.

“Last summer, it never got more than 70 degrees in here,” Rogers said.

A highly efficient masonry heater stove heats the large kitchen and living area for an entire 24-hour period with only a few pieces of firewood.

“That was a lot of fun, going to ReSource and trying to find things to reuse,” Rogers said.

In the old structure, the couple installed beetle-kill pine flooring in a working shop room. Recycled wine corks were turned into a seat in the shower, and the home’s original oak and cork flooring was revived.

Porter and Rogers are working to have the project LEED certified by the U.S. Green Building Council, a non-profit organization dedicated to green-building practices. If it passes the stringent certification process, the remodeled portion of the project will be the first LEED-certified residential remodel in Colorado, according to Rogers.

“The original owners had a real sense of sustainability,” Smith said. “They really did what they could with what was available to them at the time they built. Continuing that legacy was important.”

Porter and Rogers recently invited McLellan, who still lives in BoulderCounty, and her two daughters to an open house at their home. They wanted and received McLellan’s blessing.

“It’s all planned so well,” McLellan said. “They certainly have done a beautiful job.”